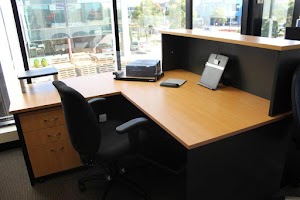 Hannah Sproule
03:41 01 Feb 20
I had such a wonderful experience buying from this store. Fast and efficient communication. When I changed from pick up to delivery they had it delivered within 24 hours. Such friendly staff. Thank you.

Giving standing desks to 20 per cent of office workers would save $84 million in healthcare costs and 7,492 health-adjusted life years by preventing obesity, type 2 diabetes and cardiovascular disease, according to the first evaluation in Australia.

Lexi Metherell, ABC 2018
Further, the article discusses how standing desks improved the overall health of the employees in the study. It also substantially offset the cost of introducing standing desks to the office environment.

Lan Gao, Alfred Deakin Postdoctoral Research Fellow at Deakin University, said the savings gleaned from standing up at work would offset the estimated $185 million cost of such an intervention. It’s Not Just About Standing Desks

With a rising obesity rate in Australia, there must be a focus on a more physical work place. This includes making workplaces healthier, safer environments for all employees. Part of this involves making standing desks available to employees. As a result, people can be active throughout the day, even while working. As stated in Metherell’s article:

Professor Dunstan suggested more attention be paid to how the physical environment could influence behaviour on a daily basis, and designing workplaces that encouraged interaction with others so that people were moving around more frequently.

Metherell’s article also discusses the standing desk converts. Those who have switched to standing desks claim that they will never look back. In fact, one cites an improvement in lower back pain and freedom in configuring desk space:

“I know that sounds really broad, but when you have the opportunity to stand and get that blood flowing, if you can’t go to the gym, I feel a lot more alert the next day and also throughout the day.”

If you would like to read more, click here to read the ABC article in its entirety! Standing desks ‘are good value for money’, study finds (Updated 7 Aug 2018, 10:47am) Buy online & collect from our warehouse for FREE All products come with a minimum 1 year warranty We have one of the largest office furniture ranges online